t can be a few of people knew if The Kiluan Bay had the great of marine lifes. Especially, the Dolphins life. If you get a tour through to the Kiluan Bay marine, close with Hindia Ocean and Sunda Strait, you can get a fascinating experient. Meet some acrobatics dolphin surrounding it. There are the Dolphin community.
We can find them if we use a traditional boat whose Kiluan Bay community had. It call as “jukung”. This boat have a unique shape that had a purpose, for adaptation with its marines characters whose had big waves and deep water. Beside that, only use a jukung to get the Dolphins life because they got to be frightened when some hunter killed them with a big boat. Why did it happen?…according to some communities interviews, a meat of Dolphins was a great “meal” to catch some sharks what can be found surrounding in Kiluan Bay area (the Shark Island area).
Known two main species of Dolphins what can be identified. There were Bottle-nose dolphin (Turciops truncatus), the bigger than the others. They had dark-grey to black color of morphology, with grey strip color on pectoral to abdominal body. Then, they had some unique habits such as calm, gently style when they had to swim, and friendly.
Another species was knows as Long-nose dolphin (Stenella longirostris), whose had dark-brown to brown color and smaller than the other species. But, it had an opposite habits with Bottle-nose dolphin too. This species love an acrobatic moving, lively, and skillful to swim. Sometimes, when we found this species, they always show their fascinating acrobatic. So, we always called them as “the great acrobaters”.
The Dolphin life lived as well as the Kiluan Bay’s communities. They help each others. When Kiluan’s fisherman want to get some pelagics fishes, the Dolphins be a guide. So, they lived together in a harmony till now… 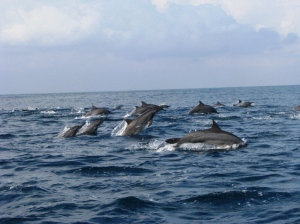